Why We Helped Make The Biggest Paper Bag In The World |

Why We Helped Make The Biggest Paper Bag In The World 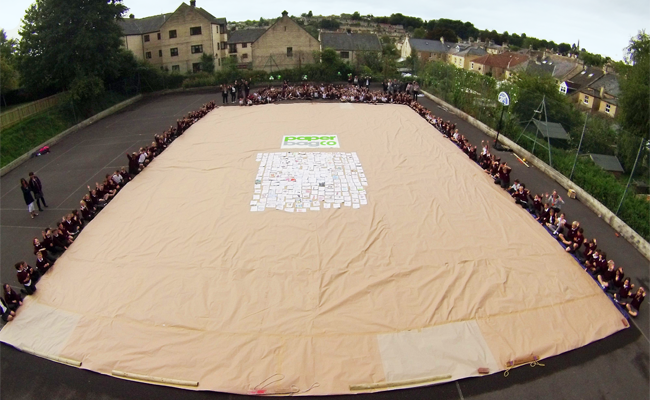 Our client, Paper Bag Co is a market leader in supplying branded paper bags and eco bags in the UK. With the advent of what is effectively a war on plastic carrier bags, which are a notorious pollutant, about to begin on 5 October 2015 via an imposed 5p per bag levy by the Government, this is a time that paper bags should get noticed as a viable alternative as they are biodegradable and there is no tax on them passed on to customers.

This new law presented an opportunity as it is a time when all the press and public is thinking about bags – how some bags are bad and some are good. So we set about creating the biggest paper bag in history to generate some interest in eco bags as an alternative for retailers to stock.

The Guinness World Record Bag we created took a lot of planning, several prototypes, experts on structural engineering and a huge amount of material. To accomplish this world record we used: 1,400 metres of brown paper, 4,800 metres of paper tape and 1,500 metres of paper string. The Paper Bag Co team along with Varn staff painstakingly putting the bag together over two days, after which, a structural engineer, Tapani Saarinen from Malishev Engineers, took the final measurements of the dimensions of the bag and this was witnessed by Bristol based Jason Heath, Relationship Manager from Santander Bank. All the school children from the local school – Fitzmaurice Primary School, helped in aspects of the bag and ended up cutting it up at the end to make mini bags to take home.

Interest On A World Scale

Was all this effort worth it? The coverage on TV, radio and in newspapers began on the day of the attempt and is still going. Accomplishing a world record may seem like an extreme way to get attention but it speaks on many levels to customers, public and media and it is says simply – no one does this better. That’s a message that makes a difference in business.

Watch the whole process of building this bag in our stop-frame video of the day.

Or click here to read more. You can also view some of the images taken on the day, below:

If you would like to discuss or request ideas on PR and Marketing please contact the team at Varn.

Stay up to date with the very latest innovations in the world of digital marketing, with the Varn newsletter.
Sign Up