Once again, Google has been rolling out new changes to the search listings and results pages worldwide. This time, the focus is on deduplicating results on results pages showing Featured Snippets. Featured Snippets are much sought-after information boxes that show up at the top of some search results pages, usually containing the answer to a query asked in the search box. These are often known as position zero and were targeted by webmasters as they provided an additional opportunity to gain visibility and space at the top of the SERPs, as well as your standard ‘blue links’ listing.

However, as of the 22nd January 2020, Google has changed the search result listings so that each webpage can only appear on the first page of search once. This means that if you previously ranked in the first position in organic search results, and then were elevated to gain a featured snippet position, your featured snippet will remain on the first page, but your organic listing will be pushed back to the second page of listings.

Danny Sullivan from Google tweeted to explain the reasons for this change, with the focus being on removing duplication in the results page. This has been rolled out worldwide and on both desktop and mobile.

What is the impact of this deduplication?

In order to assess the impact this is likely to have on website, let’s look at an example. If we complete a Google search for ‘can google crawl text in accordions’, our blog article on this topic is in the featured snippet position at the top of the page, in position zero. 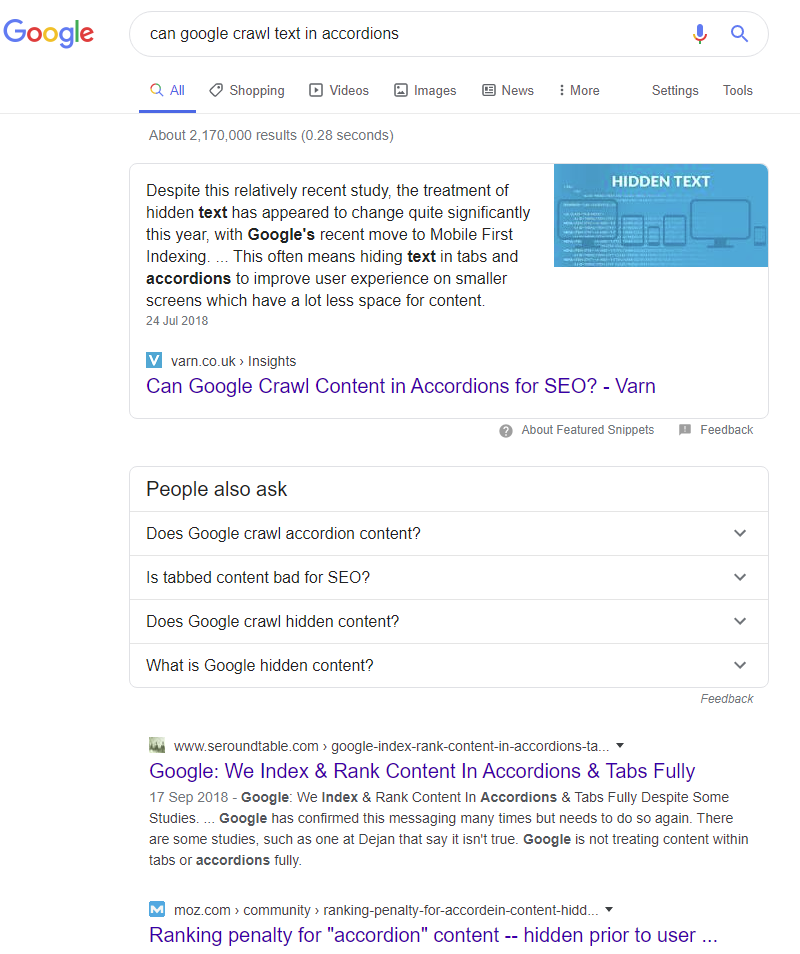 Before the 22nd January, we also held first position in the list of standard blue links below the ‘People also ask’ box. However, following Google’s new update, our standard listing has been moved down to the top position on the second page of search results. This same result has been replicated for all sites worldwide, however, Google SearchLiaison stated on Twitter that it is not a guaranteed position and that deduplication does not purposefully move the deduplicated URL to the second page. In the same statement, they also said that these positions might not stay this way, indicating that there is still a lot of testing around this change, and that we should expect the rankings to continue to change.

What other information has Google provided?

As well as explaining the deduplication and the reasons for the update, Google SearchLiaisons have released a series of statements clarifying answers to commonly asked questions following the changes being made. Predominantly, these explain the boundaries of the change, identifying what will and won’t be affected:

It appears that this update is still very much in progress with lots of testing and small changes being made, with Google SearchLiaisons and Danny Sullivan providing regular updates. As this change continues to develop over the next couple of weeks, it is important to closely monitor your featured snippets, ranking positions and Click Through Rates to assess the impact that deduplication is having on your site, as the affect will vary from site to site.

If you are concerned about the impact this change will have on the performance of your site, contact the team of experts at Varn.

Information on the update from Danny Sullivan and Google SearchLiaisons on Twitter.

Stay up to date with the very latest innovations in the world of digital marketing, with the Varn newsletter.
Sign Up